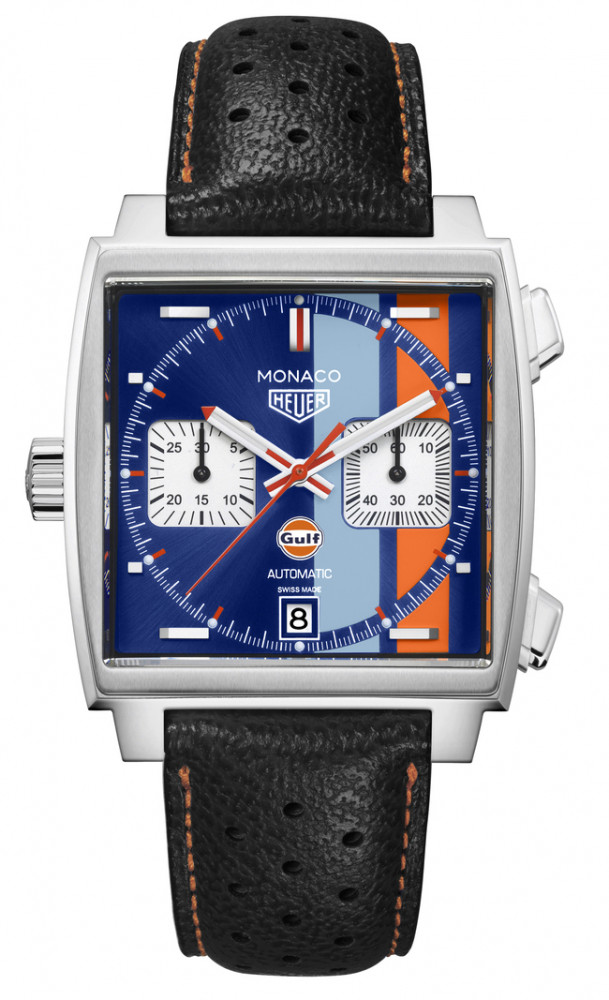 The house of TAG Heuer celebrates the 50th anniversary of the first victory of a Gulf car in the 24 Hours of Le Mans. It was on 29th September 1968, when the Ford GT 40, sporting the orange and blue livery of Gulf Oil, achieved its first victory in the world's oldest active sports car race in endurance racing. Half a century later, TAG Heuer, a partner of Gulf, celebrates this anniversary by launching a 50-piece limited, engraved edition of the Monaco Gulf watch.

The flagship model from the TAG Heuer collection is adorned with the iconic Gulf orange and blue stripes, recalling the racing car liveries. The watch features the famous 39mm square case paired with a petroleum blue dial. The stainless steel case features a see-through case-back graced with the Gulf's anniversary emblem and the individual number XX/50.

The special TAG Heuer Monaco Gulf 50th Anniversary timepiece replica watch is powered by the automatic chronograph movement TAG Heuer Calibre 11. This left-handed watch is inspired by the legendary 1969 Monaco Calibre 11 worn by Steve McQueen in the “Le Mans” movie. The setting crown is placed at 9 o’clock position, while the chronograph pushers are on the right side of the case. The dial reveals two opaline sub-counters, a round minutes and seconds track, as well as a date window located at 6 o'clock.

The watch is water resistant to 100 meters and paired with a black perforated calfskin strap with orange stitching and lining.

Login to quote this blog

You cannot quote because this article is private.